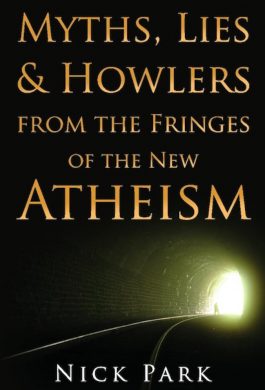 Sample from “Myths, Lies & Howlers from the Fringes of the New Atheism”

Evangelical Alliance Ireland has just released Nick Park’s latest book, “Myths, Lies & Howlers from the Fringes of the New Atheism”.  It is a resource for all believers, but especially young people, to recognise and understand some of the most common untruths that are used to attack the faith of Christians via internet and social media.

The book is available as an eBook on Amazon for 99c :  Amazon USA    Amazon UK & Ireland

The paperback version is available for €6 (including postage & packing) from nickpark.ie

However, we want to make this resource available to as many young people as possible, so churches can order 10 or more copies at the special discounted price of €2.50 per copy (delivery costs extra, or can be collected from Dublin or Drogheda). Email nick@evangelical.ie for more details

Here is a free sample from Chapter Six: “Pi, Bats & Mutant Killer Bears”, where Nick demolishes Richard Dawkins’ claim that the Bible is in error by falsely describing bats as being birds.

In the Old Testament we find a list of birds that the Jews were to consider as unclean to eat (Leviticus 11:13-19). These include buzzards, owls, vultures and bats.

Bats? Does the Bible really say that bats are birds? It’s easy to understand why Richard Dawkins makes fun of this. This is a common argument advanced by new atheists as proof of errors in the Bible.

Richard Dawkins is a biologist. As such, he knows better than anyone that dividing things into categories is a human trait. For example, we divide edible plants into categories of fruit and vegetables. But how do we know which is which?

That might seem a stupid question. After all, we all recognise that a peach is a fruit while a cabbage is a vegetable. But what about a tomato? Is a tomato a fruit or a vegetable? Surprisingly, a botanist and a chef will give you two very different answers.

The botanical definition of a fruit is a fleshy seed-bearing structure of a flowering plant.[i] So, in the eyes of any biologist (such as Richard Dawkins), a tomato is clearly a fruit.

But a chef has a completely different definition of what is a fruit and what is a vegetable. In cuisine, a vegetable is something savoury that is customarily served with a main course, whereas a fruit is served as a dessert.

This dispute over how to classify a tomato was once argued all the way to the United States Supreme Court, since vegetables were subject to tariffs whereas fruit was exempt. The Court sided with the chefs rather than the botanists, and ever since the tomato has been legally defined as a vegetable![ii] Which leads to one of my favourite sayings, ‘Knowledge is knowing that a tomato is a fruit. Wisdom is knowing not to put a tomato in a fruit salad.’

So what have tomatoes got to do with birds, bats or atheism? Quite simply, the dispute over whether to classify a tomato as a fruit or a vegetable demonstrates that such classifications and categories are purely human constructs. They can change over time, or even change according to whether you are a botanist or a chef.

The same applies to birds and bats. According to modern zoological classification, a bird has feathers, wings and a beak. Bats, although they have wings, have neither feathers nor beaks and are classified as mammals. We can certainly agree with Professor Dawkins on that point.

But what about the ancient Hebrews? They had a different definition. The word ‘bird’ in Leviticus 11 is oph – and it literally means ‘a wing’. For the Hebrews, an oph was a two-legged, winged creature – and the bat fitted nicely into that classification. When they described a bat as a ‘bird’, they were simply saying that it was a winged creature with two legs. True, the Hebrews’ classification was different from that of modern biologists, but that doesn’t mean it was wrong – no more than chefs or the United States Supreme Court are wrong because they use a different classification than biologists when it comes to tomatoes.

Actually, it requires a high degree of cultural prejudice and snobbery to expect ancient cultures to always use the same systems of classification as modern biologists. It also takes a degree of stupidity to fail to understand that categories such as ‘fruit’, ‘vegetables’ or ‘birds’ are human constructs. I can understand why some of the less intelligent new atheists would see this as a convincing argument. But Richard Dawkins is not stupid. He is a highly intelligent and educated man. He is certainly intelligent enough to understand that the Hebrews were using a different system of classification when it came to birds. And that, sad to say, may well take this particular new atheist howler out of the classification of ignorant mistakes and place it in the classification of cynical dishonesty.