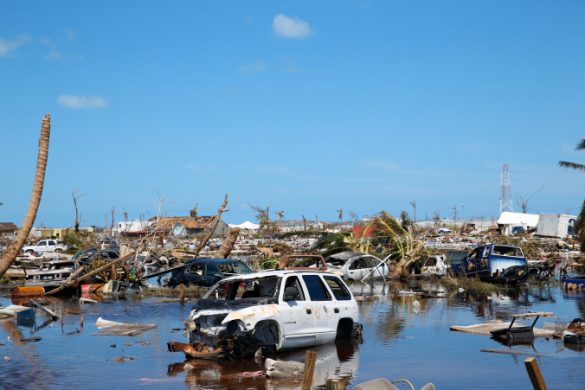 Hurricanes in the Bahamas & Prayer in Dublin for the Climate

One of the most devastating news stories in the last few weeks has been the aftermath of Hurricane Dorian in the Bahamas. A friend of mine has strong links in the Bahamas and is out there now in some of the worst-hit areas. The reports he is sending back and posting on social media are absolutely heart-breaking. I have been to Grand Bahama Island on a number of occasions and when you see it, one of the first impressions you have is just how flat it is. It is particularly vulnerable to abnormal sea levels, and to see news footage of it swamped by the hurricane is horrible.

According to news reports, 17% of the population of the Bahamas has been made homeless. Initially it was reported that 2,500 were missing. Thankfully, that number has now been reduced to 1,300 after officials cross-referenced their lists of missing and evacuated residents. It will be some time before we know any kind of accurate death toll. Whatever way the statistics finally pan out, it has been a truly horrible event for the Bahamas.

People used to refer to hurricanes as ‘acts of God’ – but I don’t for one moment believe God wanted this misery to be inflicted on the Bahamas. The Christian doctrine of the Fall asserts that we live in a broken and fallen world – far removed from how it was originally intended by our Creator. Increasingly, it looks as if it might be similarly inappropriate to refer to a hurricane as a ‘natural disaster.’ We are seeing an increase in the frequency and intensity of extreme weather events – and an ever-growing body of scientific evidence suggests that human activity is a contributing factor in this trend.

Climate change is affecting all of us, not just in places like the Bahamas. Here in Ireland, in just one year, we had our first ever hurricane, the worst snow I can remember (over 2 metres of the stuff in a lane near our home), and a heatwave that caused road surfaces to melt. This is all part of the changing climate. The last five years have been the warmest ever recorded in the 139 years that the US National Oceanic and Atmospheric Administration has been measuring global heat.

Climate change is not just about rising temperatures. It doesn’t just mean warmer weather.  – it means weird and extreme weather. Warming produces more moisture in the air – which in turn leads to heavier rainfall, hailstorms and snowfall.

Some people insist that the scientific evidence on the causes of climate change is ambiguous – but the vast majority of scientific opinion supports the evidence that human activity is a major cause. A small minority of scientists deny climate change, but many of them receive millions of dollars in funding from oil companies and groups such as the American Petroleum Institute. This is strongly reminiscent of the ‘scientists’ who received funding from tobacco companies in order to cast doubt on the fact that cigarette smoking was harmful to health.

For a great number of Evangelical Christians, myself included, abortion is one of the most widespread and harmful evils and injustices in the world today. Because being pro-abortion is widely viewed as a ‘left’ issue, then many Christians say to themselves, “I’m against abortion, therefore I have to be on the right.” But then they embrace a whole package of positions that are seen as being on the right. But we aren’t obliged to agree with everything that is seen as being on the right. Neither should we automatically disagree with everything that is viewed as being on the left. We need to ask, “Where does Jesus want me to stand on each issue?” Not left or right, but right or wrong.

When it comes to climate change and extreme weather events, the fact is that the poor are disproportionately affected. For those of us living in more prosperous parts of the world, yes, we still suffer ill effects. When we had our Irish hurricane and blizzard, our home was cut off from the electricity supply for a number of hours. I lost a tank full of tropical fish. But that’s not a life-or-death issue (well, it was for the fish, but not for me). Whereas, for the poor of this world, climate change and extreme weather are life-or-death issues. People are dying now because increased exposure to the sun, caused by a depleted ozone layer over the Andes, is causing cancer rates to skyrocket. Soil erosion on the edges of the Sahara is leaving entire communities destitute. Extreme weather events are destroying lives, homes and livelihoods.

For us as Christians, this should never be a matter of indifference. We should be concerned, even outraged, when the poor suffer through the actions of the wealthy. We are supposed to care for the defenceless. We are supposed to speak out for the voiceless. That’s why I’m passionate about abortion. I find it absolutely barbaric that we should kill the most defenceless and voiceless members of our society – unborn children. That’s why Evangelical Christians were at the forefront of the fight to abolish slavery on both sides of the Atlantic. And that’s why we should be profoundly concerned at what is happening with our climate.

We know the stuff we should all be doing – recycling waste and using renewable energy – but sometimes it seems like we are up against forces that are so much greater than our best efforts.

For example, consider this. The whole bitcoin phenomenon is spawning a bitcoin mining industry – where massive energy-hungry computers perform hugely complicated mathematical calculations to validate transactions. It is profoundly depressing to realise that bitcoin mining now produces 22 million tonnes of carbon dioxide every year. That is the equivalent of 35 million trucks driving all year round. Or, to put it another way, bitcoin mining consumes as much electricity as a nation such as the Czech Republic. Making a few minor adjustments in our lifestyles feels like a drop in the ocean.

So what do we do? Do we light a candle? Or do we curse the darkness?

I’m delighted that TearFund Ireland are holding a Prayer & Worship Evening for the Climate at Third Space, Smithfield, Dublin, on Monday 23 September from 7pm to 9pm.

Sadly, I have no doubt that some within Evangelical Christianity will deride my friends at TearFund for holding such an event. They may even call them ‘liberal lefties’. I want to congratulate TearFund for operating within the very best of Evangelical tradition. Their concern for the poor who suffer due to climate change is thoroughly consistent with the abolitionist campaigns of William Wilberforce, and the championing of the right to life of unborn children.

If you want to attend the TearFund Ireland Evening for the Climate then you can register at:    https://www.eventbrite.ie/e/prayer-and-worship-evening-for-the-climate-tickets-68437489373