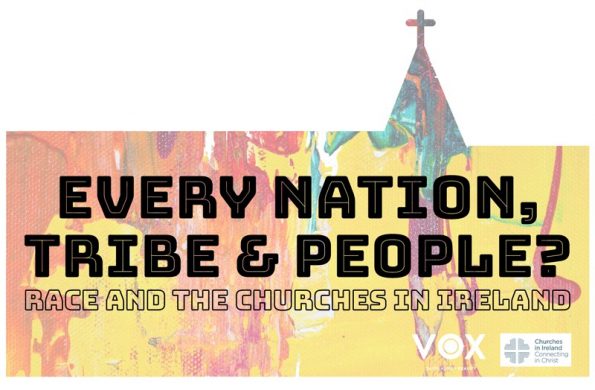 Every Nation, Tribe & People? – Race and the Churches in Ireland

We want to deepen our understanding of the experience of and attitudes towards racism and discrimination in churches in Ireland. We explore the potential for unity, integration and inclusion and examine how the church can lead the way in tackling racial injustice. The survey is anonymous and we hope to gather views from all Christians across the island of Ireland. We estimate it will take you about 10- 15 minutes to complete. Take it now or read down for further information.

At VOX magazine, we’ve always been passionate about giving voice to Christians in Ireland.  That has often involved carrying out high-quality and wide-ranging independent research on matters relating to the Church.  We want to consider the unique issues, perspectives and challenges for Christians on this island (rather than quoting research carried out in England or America).

Although not an academic institution, VOX has the advantage of a broad and deep understanding of the Christian community and a significant relationship network across multiple streams and networks. Our major VOX research into Young Adults (2015) and Women and the Church 2018 produced important findings from across the full spectrum of mainstream denominations as well as independent, migrant and emerging church networks in Ireland.

When we began considering our next major research project at the beginning of 2020, one recurring theme came to the fore.  How could we understand the experiences of ethnic minorities as well as the attitudes of church communities towards new Irish members in our congregations?   (And at that point no one here had ever heard the name George Floyd.)

Our early discussions were brought into sharper focus by the pandemic as concerns arose about Direct Provision and the impact of Covid on migrant communities such as those employed in meat factories.  In the summer of 2020, many Christians took part in Black Lives Matter marches across the island.   Amid voices describing incidences of racism or speaking out in solidarity, there was also resistance from some, who raised concerns or felt the debate was unbalanced.

After discussions with many groups across the island, we discovered this was also a priority for the Irish Inter-Church Meeting (irishchurches.org), and we formed a partnership with them to launch the research together with support from the Evangelical Alliance Ireland, Evangelical Alliance Northern Ireland and Tearfund.

Damian Jackson, Programme Officer of the Irish Council of Churches and Irish Inter-Church Meeting says: “As an organisation, the treatment of asylum seekers and refugees has long been a concern. More recently we have been examining the connections between this asylum system and an underlying systemic racism that has informed it and can also be stoked by it, as we saw at the end of 2019 in the various protests against Direct Provision centres across Ireland.

“Since then we have realised that as churches we need to respond to racism, discrimination and exclusion in Ireland, and in order to do that effectively and with authenticity, we need to begin by looking at ourselves. We believe that every person is a bearer of God’s image and that part of our calling to love our neighbour requires us to have concern for barriers to belonging and flourishing in our churches. We hope that this research will reveal the ways in which our church cultures, habits and practices need to change to enable that flourishing and inclusion while shedding the light of Christ onto the attitudes and biases in our hearts.”

Evangelical Alliance National Director, Nick Park, said, “Ireland’s experience with immigration and race is unique. The role of the Christian Church is also different from most other countries. We have an incredible opportunity for the Church to be a powerful voice of grace and unity. While slogans and sound bites from other contexts and societies have obviously resonated with many, we need to develop an authentic Christ-like approach that will help us to celebrate and value one another. VOX Magazine has the research experience and breadth of contacts to help us really understand where we are right now with respect to racism and discrimination. As a Christian leader, I consider this research project to be invaluable for those of us who want to be part of the solution rather than part of the problem.”